We have shared the data "19 Population density of China at the town level" at the Data Released channel of BCL.

Spatially explicit population grid can play an important role in climate change, resource management, sustainable development and other felds. Several gridded datasets already exist, but global data, especially high-resolution data on future populations are largely lacking. Based on the WorldPop dataset, we present a global gridded population dataset covering 248 countries or areas at 30 arcseconds (approximately 1km) spatial resolution with 5-year intervals for the period 2020–2100 by implementing Random Forest (RF) algorithm. Our dataset is quantitatively consistent with the Shared Socioeconomic Pathways’ (SSPs) national population. The spatially explicit population dataset we predicted in this research is validated by comparing it with the WorldPop dataset both at the subnational and grid level. 3569 provinces (almost all provinces on the globe) and more than 480 thousand grids are taken into verifcation, and the results show that our dataset can serve as an input for predictive research in various felds.

The full report is also available online at the EFC website: https://www.efchina.org/Reports-zh/report-lccp-20210207-3-zh

We delineate metropolitan regions of China using the population census in 2000 and 2010, respectively. The benchmark used here is 1000 persons per square kilometer. The first map is for the whole China, and the other three are for the three main urban agglomerations (in the same scale for cross comparison). Note that commuting is not considered in the study due to data limitation.

Data source: the population census of China in 2000 and 2010, in the township scale

In the township scale for the whole China

We have released the township level population data in 2010 at the Data Released channel (Data 19). 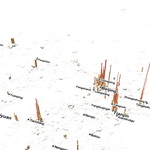 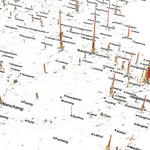 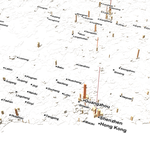 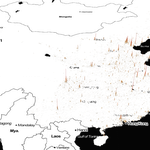 With more than 15 million new urban residents entering its cities every year, China is witnessing one of the greatest socioeconomic and environmental transformations in human history. In addition to these ongoing changes, urbanization in China often involves a significant political dimension, as the government would purposely accord city status to settlements, regardless of their developmental level: Largely rural settlements could be turned into “cities” overnight by administrative power. Nevertheless, city status would often translate into real urban growth, as it is closely linked to the land use quota, provision of public services, as well as local governments’ power in China. While socioeconomic and environmental aspects of Chinese cities have been analyzed extensively with aggregated statistics and remote sensing data (Deng et al, 2012; Liu et al, 2012), little is known about the shifting political geography of Chinese cities, i.e., where new city status are being granted. It is this lacuna that our project aims to fill.

We focus on the basic building block of a city proper in China: Jiedao (sub-districts). Jiedao’s counterparts in the rural area are Xiang (township) and Zhen (town), and all three are termed as township-level administrative units. We geocoded the 41,871 towship-level units based the Population Census of China, and estimated the spatial extent of individual units with Voronoi diagrams for the years of 2000 and 2010.

The end product is the first ever map of “mushrooming” Jiedaos in China. The total number of Jiedaos has grown from 5,510 to 6,923 – a 25% increase – during 2000-2010. Most new city-propers are created around major urban regions along the economically more developed eastern coast (e.g., Yangtze River Delta, Pearl River Delta, Shandong Peninsula, and Beijing-Tianjin-Hebei (BTH)). Other regions with noticeable growth are Central Henan in Central China, as well as the Chengdu-Chongqing corridor in West China. As Zhens are often turned into Jiedaos and considered as “next in pipeline” for city status, we also map out the distribution of Zhens. Again, regions in East and Central China (e.g., Shandong and Henan) feature predominantly, revealing the potential for future urban expansion.

As city status often translates into real urban growth, we conjecture that the uneven geography of mushrooming Jiedaos would entrench the already huge East-West divide in China.